Category by- Pharma & Healthcare , No. of Pages - 250, Published By - Ameco Research 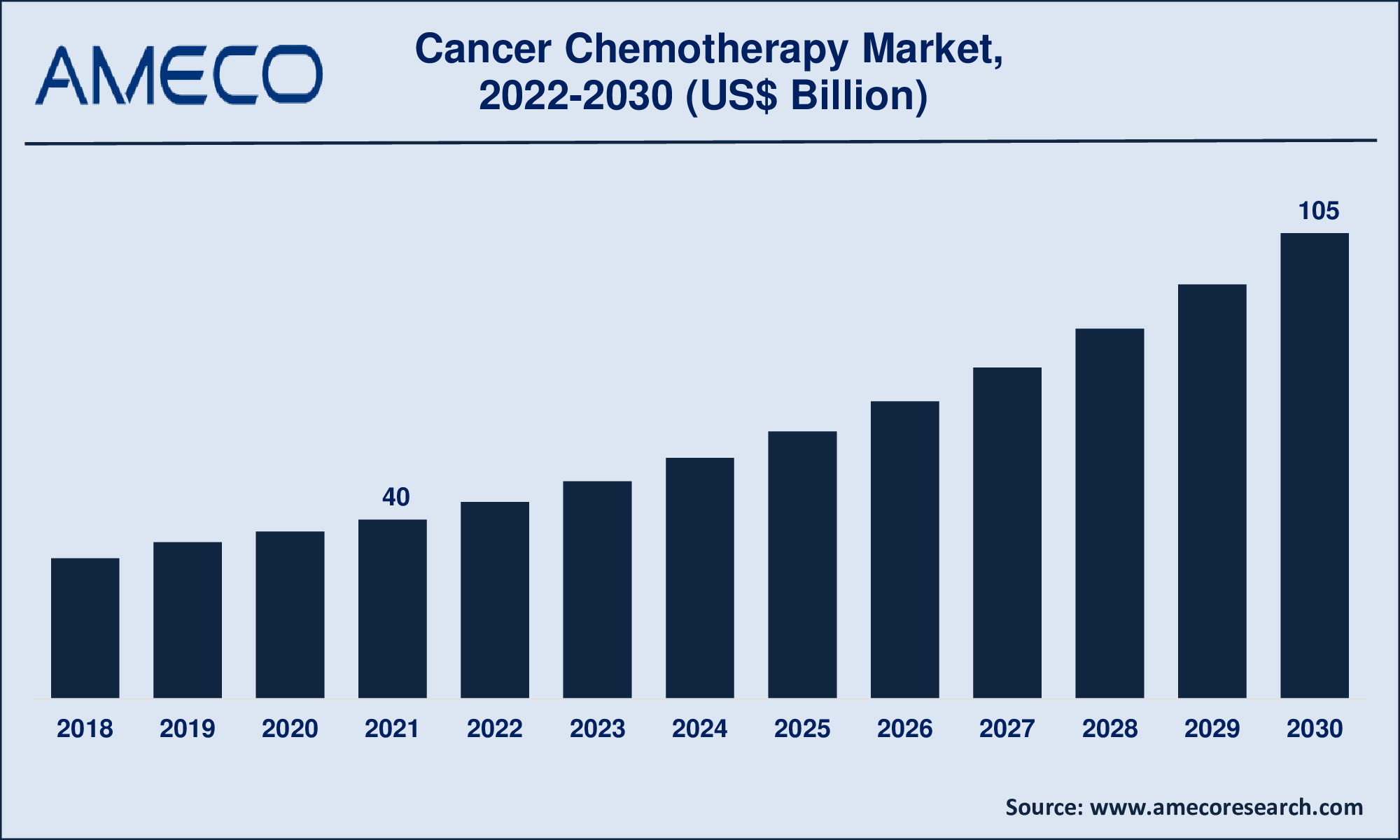 Chemotherapy kills cancer cells by using anti-cancer (cytotoxic) medications. Toxic to cells is a term for this. Chemotherapy agents that are cytotoxic alter the division and growth of cancer cells. The blood is where most chemotherapy drugs are transported. They can therefore access cancer cells wherever in the body, according to this. Chemotherapy destroys cells that are dividing to become two new cells. The bodily tissues are composed of countless billions of cells. Once we reach adulthood, the majority of the body’s cells rarely reproduces and proliferates. They only split apart to heal damage. The cells in cancer continue to divide until there is a mass of cells. A tumour is a collection of cells that has grown into a lump. Chemotherapy has a far higher chance of killing cancer cells since they divide much more frequently than the majority of normal cells. Some medications destroy the area of the cell's control centre that triggers cell division, killing dividing cells. Other medications stop the chemical reactions necessary for cell division.

Changes (mutations) to the DNA within cells are what lead to cancer. A cell's DNA is organised into numerous distinct genes, each of which carries a set of instructions directing the cell's performance of certain tasks as well as its growth and division. Incorrect instructions can make a cell cease functioning normally and even give it the chance to develop cancer.

Roughly 10 million deaths, or nearly one in six deaths, were caused by cancer in 2020, making it the top cause of death globally.

Breast, lung, colon, rectum, and prostate cancers are the most prevalent types of cancer. In a multi-stage process that often goes from a pre-cancerous lesion to a malignant tumour, cancer develops when normal cells undergo a transition into tumour cells. Age-related risk accumulation for particular cancers is most likely the cause of the sharp rise in cancer incidence. In addition to the general risk accumulation, ageing people tend to have less efficient cellular repair systems.

The rising cost of healthcare, which aids in developing its infrastructure, is another important factor affecting the growth rate of the market for chemotherapy drugs. The market dynamics will be further impacted by various government organisations' efforts to strengthen the healthcare infrastructure by boosting funding.

The three categories of the global cancer chemotherapy market are indication, drug class, route of administration, end-user, and region. The segmentation based on the Indication includes colorectal cancer, lung cancer, breast cancer, prostate cancer, stomach cancer, lymphoma, leukemia, ovarian cancer, and others. In terms of Indications, the breast cancer is expected to grow with the fastest growth rate from 2022 to 2030. Based on Drug Class, the market is categorized into mitotic inhibitors, alkylating agents, antimetabolites, topoisomerase inhibitors, antitumor antibiotic, and others. Route of administration segment is divided into intravenous, oral, subcutaneous, intra-muscular, intravesicular, topical, intraperitoneal, intraventricular/intrathecal, and others. Furthermore, end-user segment can be further divided into specialty centers, hospitals & clinics, and others.

The North America, Europe, Latin America, Asian-Pacific, and the Middle East & Africa regions make up the five geographical segments of the global Cancer Chemotherapy market. Among all the regions, North America dominated the market with largest shares in 2021. The region's rapidly expanding patient population is what is driving the increase. Furthermore, the presence of a base population with high incomes who can spend money on treatment is supporting the regional market value. The demand for chemotherapy medications in North America is expected to rise due to an expected rise in cancer incidence. The American Cancer Society estimates that 1.7 million new cancer cases were identified in the United States in 2018, and 609,640 people passed away from the disease. However, the Asia-Pacific region is anticipated to witness the fastest growth rate from 2022 to 2030.

Market By Route of Administration